meditate daily on this, for in it is concealed a Great Mystery. 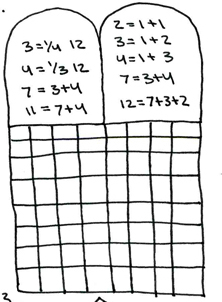 from the combination of the four pentacles comes the central base four (pesher: 12 pointed) cardinal cross. This cross is the symbol of the Knights of Malta, who were a royal order of knights that have been been accepted into the folds of the Mother Church as an Order of Priests, but differs slightly from their form of cross, which only hints at this, "true" cross, composed of four pentagrams. The historical lesson of this is that it takes eight to constitute five. You would do VERY Well to remember this lesson as long as you continue to live.

If you take 9 tetrahedra and arrange them face-to-face to form a chain, the end result will leave 22 triangular faces exposed. These 22 triangular faces can be seen as equivalent to the 22 Hebrew letters and their base 12,7,3 correspondences to zodiac signs, planets and alchemical elements. The 9 tetrahedra themselves can be coloured according to the 7 colour spectrum plus one black and one white at either end. This arrangement constitutes the "wand" or "scepter" of the Lemurian priest.

From left to right, these are the costumes worn by the presiding officials of the ordinary operating church: The first degree Rosicrucian wears a white sash over a red robe and holds a quill pen and a well of ink. The second degree Rosicrucian wears a yellow sash over a pink robe with a Rosicrucian cap, and holds a book. The third degree Rosicrucian wears an orange sash over a purple robe with a Ros. cap with an eagle feather in the brim, and holds an open scroll. One of the two Illuminati priests wears an orange over yellow sash, a crescent moon headband and carries a sickle and a dead venomous snake. The other Illuminati priest wears a yellow over orange sash, a solar disk helmet and carries a hammer and staff. The OTO minister wears a skull mask under a black hood with a brown leather tunic, a grey cape, a red striped and green squared kilt under a three, white tailed apron, with curling toed shoes and holds in one hand an amythest crystal ball and in the other a monkey's paw.